The Royal British Legion today urged the British people not to forget the ongoing needs of veterans and their families after the Remembrance period.  The call comes as the charity released the findings from the most comprehensive survey into the needs of the Armed Forces Community that has been undertaken in ten years.

This latest research suggests that there are around6.2 million people within the ex-Service community in the UK, over half of which are over the age of 75.

Around 630,000 members of the ex-Service community of all ages are likely to be experiencing problems getting around outside the home. Large numbers (around 720,000) experience problems with self-care, including exhaustion and pain, bladder control and difficulty looking after themselves. All of these problems peak for those aged 75 or over.

Depression affects around 480,000 members of the ex-Service community, around 370,000 report feeling lonely, and around 350,000 are recently bereaved.

The survey results also highlight a number of specific issues which appear to affect the working age ex-Service community disproportionately, compared to the general population.

Chris Simpkins, Director General of The Royal British Legion, said: “The Royal British Legion was founded because after the First World War veterans were, by and large, left to fend for themselves: many faced serious problems finding work, were affected by disability and disfigurement, and many stoically suffered mental distress at what they had experienced. Those days are, thankfully, over. However, while many of today’s ex Service personnel and their families are doing well, this survey provides new evidence of the scale and variety of needs of our community.

“We will not rest easy while many veterans and their spouses are out of work, while others report loneliness and depression, and while hundreds of thousands report difficulty getting around and have serious care needs. Whilst for two weeks of the year we’re best known for maintaining the memory of the fallen, we work 365 days a year for a better future for the living.”

The survey was produced in collaboration with The Forces in Mind Trust. Air Vice-Marshal Ray Lock CBE, Forces in Mind Trust Chief Executive said:“This survey, whilst not claiming to provide absolute certainty, at least provides considerably greater clarity; it should allow those charged with supporting ex-Service personnel and their families to plan and to identify how better to provide that support.

“The need for the Start and military charities to support our ex-Service personnel will be enduring, but how, where and to whom, that support is delivered will change, as most certainly will the resource available. We must collaborate, and we must take decisions and act from a position of best possible evidence: independent and credible evidence. The aim of this survey is to provide just such evidence.”

Click here for a link to the survey report.

–       Survey Methodology: A series of screening questions were asked to identify members of the Armed Forces community. In total, 20,700 UK adults were screened and, of those, 2,203 were eligible to be asked the Legion’s series of questions. Serving personnel and their dependants were removed for reporting purposes, leaving a final survey sample of 2,121 members of the ex-Service community (veterans and their adult dependants).

–       The Royal British Legion’s sister charity Poppy Scotland will publish a separate report providing an analysis of Scottish veterans and their families on 3 December 2014.

–       The report also contains a ‘myth busting’ section which, while not a result of the research, aims to dispel some common myths propagated about the ex-Service community.

–       The Royal British Legion’s work is encapsulated in its motto: Live On – to the memory of the fallen and the future of the living. The Legion is the nation’s biggest Armed Forces charity providing care and support to all members of the British Armed Forces past and present and their families. It is the national custodian of Remembrance and safeguards the Military Covenant between the nation and its Armed Forces. It is well known for the annual Poppy Appeal, and its emblem the red poppy. www.britishlegion.org.uk 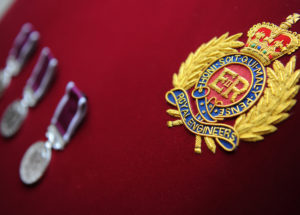 Profile and Needs survey of the UK Armed Forces Community