New research, published today, has found that veterans are significantly more likely to struggle with problem gambling than non-veterans in the UK.

Veteran participants were also found to be at a much greater risk of poor mental health outcomes including depression, anxiety, post-traumatic stress disorder, and to have an alcohol and/or nicotine dependence.

Gambling is estimated to cost the UK between £26 million and £1.6 billion in economic, health, societal and criminal justice costs. This research found that veterans with problem gambling had higher health care and benefits costs, as well as higher levels of debt than non-veterans.

The researchers have emphasised that the findings must be considered with some caution. Professor Simon Dymond, lead author of the report, said: “Our findings do clearly indicate that veterans are at greater risk of gambling harm than the non-veteran population, but we cannot with confidence report the scale of the problem. The sample was recruited online, and veterans who have gambled may have been more likely to take part – therefore, the findings should be treated with caution.

“Despite this, the significance of the findings is indisputable. This is the first UK study to explore the impact of gambling on UK ex-Service personnel, and our findings are consistent with the international body of work which finds that veterans are at greater risk of gambling harm.”

Recommendations from the report include:

Justyn Rees Larcombe, a Co-Investigator on the report, experienced problem gambling following a successful career in the Army. He said: “These findings are shocking. I knew I wasn’t alone in this from speaking to other veterans about our experiences – but it’s clear that this problem affects a lot of people. Gambling caused so much damage to me and my family, and I want to warn other veterans about how dangerous and destructive it can be.

“The Study has clearly identified a problem, so we must now address the reasons veterans experience problem gambling, and support those who suffer the consequences. I got addicted to the thrill of online gambling and it nearly destroyed my life. I don’t want others to suffer as I have.”

Tom McBarnet, Director of Programmes at Forces in Mind Trust, said “This research has significant implications for the wellbeing of UK veterans and the organisations which support them. Although further research is needed to identify the exact scale of the problem, veteran status was clearly a significant predictor of problem gambling in the survey respondents.

“Forces in Mind Trust exists to enable all ex-Service personnel and their families to transition into successful and fulfilled civilian lives, and it appears that problem gambling could be a significant issue for Service leavers.

“This report identifies and highlights sobering facts that should make policy makers and service deliverers sit up and take action.”

Findings from this study are undergoing peer-review and one manuscript has recently been accepted for publication.

The full report is available here. 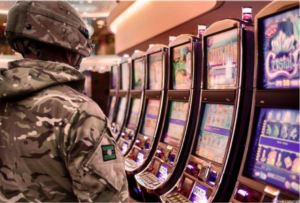