The two-year project, prompted by a call for further ‘results-focused research’ within FiMT’s Transition Mapping Study published in 2013, will focus solely on the experiences of armed forces who took part in counter-insurgency (COIN) operations, which are believed to be distinctly different to those of personnel who took part in more ‘conventional’ forms of conflict.

As well as the UK’s regular forces, the project will also incorporate the experiences of reserve forces.   It is intended that the research findings will be used to help influence policy makers and service deliverers in their work with the ex-Service community.

Ray Lock, Chief Executive of the Forces in Mind Trust said: “The UK’s armed forces have considerable experience of both counter insurgency and major combat operations.  This project for the first time will allow us to understand how the very different characteristics of the two types of operations, affect people’s ability to transition successfully into civilian life.  I’m certain the findings will provide clear insights for both policy makers and service deliverers.”

Professor John D Brewer, Principal Investigator at Institute for Study of Conflict Transformation and Social Justice said: “Queen’s University is delighted to receive this award and for the opportunity to work alongside the Forces in Mind Trust in understanding the experiences of counter-insurgency soldiering. The research will help us in trying to make a difference to the lives of armed force personnel and their families when coping with a return to civilian life.” 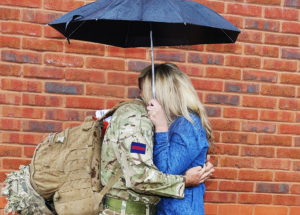