13th May 2021 – A new report has shed light on the use of performance and image-enhancing drugs (PIEDs) in ex-Service personnel.

The research, from the University of Sunderland and funded by Forces in Mind Trust, found that body image and keeping up with the demands of active duty are the main reasons for using PIEDs.

The research included a systematic review of international literature, and a qualitative study of UK veterans who were taking PIEDs. Serving personnel who use PIEDs are most likely to be young, male, non-commissioned Army personnel. The most common products include anabolic steroids, body building products and weight-loss supplements.

Nutritional supplements were the common pre-cursor to PIEDs use, alongside support from peers. The majority of those interviewed spoke of ‘beasting’ (repetitive, punishing physical drills and training in an effort to get personnel fit) and [they felt] to ‘weed-out’ those who may not suit the forces) during training and the role it played in taking supplements to cope.

Despite awareness of risks to physical and mental health, and of health risks around product quality and method of intake, users often justified continued PIEDs-use on various grounds, even where some had experienced serious medical side effects.  Notably, all study participants stated that they would rather not have started taking PIEDS but felt they would now struggle to stop.

Service personnel tend to purchase PIEDs online, from other countries they visit on deployment, or from fellow Armed Forces personnel. The researchers noted additional risks for those who begin taking PIEDs while on deployment, particularly if they then take up opportunities to purchase them while deployed.

The researchers recommended further research to explore the impact and use of PIEDs in the Armed Forces, and suggested that their findings provide a rationale for bespoke interventions for military personnel.

Ray Lock CBE, Chief Executive of Forces in Mind Trust, said: “From the findings of this report, we clearly have cause for concern about current and ex-Service personnel using PIEDs. Despite the evidence that they are harmful to physical and mental health, some elements of the military culture and experience seem to provide opportunities and false justifications for using PIEDs. Those responsible for the wellbeing of military personnel and veterans must take steps to understand the threat that PIEDs pose, and consider how they can prevent the temptation of taking PIEDs, whilst ensuring support can be accessed without fear of stigma.”

Dr Ian Whyte, former Team Leader and Principal Lecturer in Sport and Exercise at the University of Sunderland, said: “Many of the main findings were not a surprise in terms of the motivations for taking PIEDS. Getting bigger muscles, becoming stronger, and looking good were the main reasons that our respondents took PIEDS. However, the difference for our cohort is that for many, looking good and being stronger were related to their perceptions that they had to look ‘tough’ when in combat zones, be able to cope physically and mentally when there, and ‘hold their own’ in training.

“Like many people taking PIEDS, the internet is both their source of supply as well as a source of information, but this does not come without risk. Most of our ex-Services personnel had experienced some form of illness or negative health consequences due to unregulated products or unsubstantiated information. To exacerbate these problems, due to their experiences in the military, they noted that they were unlikely to seek medical help or advice unless ‘things got really bad’.”

The University of Sunderland’s Vice-Chancellor, Sir David Bell, said: “As a University, we are committed to supporting the Armed Forces, veterans and their families, with our work being recognised with a Gold Armed Forces Covenant Award. That is why it is particularly appropriate for us to be engaged in this study and laudable that the Forces in Mind Trust is asking these difficult questions. I am honoured that the Trust commissioned the University of Sunderland to assist in finding the answers and I commend this work accordingly.” 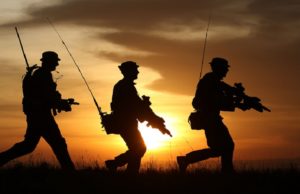