The three Armed Forces Families Federations, at the heart of military family life, are today celebrating the news that they were successful in a joint grant application to the Forces in Mind Trust.

The substantial grant will allow funding for each Families Federation to train and employ a Transition Liaison Officer. They will be the expert on all issues associated with transition and will research the current support available and identify gaps.   They will support families in transition from military to civilian life, acting as their advocate and champion, and highlighting where there is a need for improvement and change.

The joint application to the Forces in Mind Trust originated when the three Federations identified that families have difficulty accessing the plethora of events and services on offer for those about to transition, due to these generally being directed at Serving personnel rather than at their families.

“We acknowledge that serving personnel receive robust transition advice and support, which is good.  However, the evidence from all 3 Services points towards the fact that families do not engage with support and advice on transition, either because it isn’t accessible or because it simply isn’t there.

“Service families play an incredibly important role in supporting their Service person during their service and this continues as they transition into civilian life. Alongside our colleagues in the other Families Federations, we decided to approach the Forces in Mind Trust for funding to allow us to begin to address this gap.”

“This grant will not only allow us to give ‘boots on the ground’ support to families who are vital in a successful transition for Service leavers, it will also allow us to understand the needs of transitioning families now and in the future by monitoring and evaluating the evidence provided by our Transition Officers.  This will ensure that the legacy of this grant will be far reaching and its benefit felt for many years to come.”

“This generous grant from the Forces in Mind Trust will give us the tools necessary to empower and engage families in the transition process for many years to come, ensuring that the core value of each Family Federation, putting families first, is upheld.”

With the award of the grant confirmed, each Federation will now begin the task of employing and training their Transition Officers.  The role will be varied, including responding to transition queries from families, liaising with relevant stakeholders, and designing and implementing an accessible ‘transition toolkit’ for families to use in the future.

“We know from our Families Engagement Programme, and our wider work, that the families of Service personnel play a hugely important role in helping to achieve a successful, sustainable transition. It is vital that they are themselves supported during the transition period and that their particular needs and circumstances are adequately addressed. The posts funded by this grant will be a valuable source of support and make a valuable contribution to this key component of transition.”

For more information on the work which AFF, NFF, RAF FF, and Forces in Mind Trust carry out please visit their websites.

– AFF can be trusted

– AFF is bold and determined 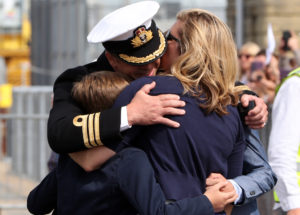